AWS architecture for a SaaS

The amount of different services available in AWS (or any of the other big cloud providers) can be overwhelming if you're just trying to build a side project. But, if you're like me and you like to try and learn, this post might be useful for you. I recently build a SaaS project and hosted all its components in AWS. In this article, I'll explain all the AWS services I used and how they are combined.

The project is a web application (with SSL enabled for HTTPS traffic) that has some public pages and a private dashboard that only logged users can access. The public pages have a few forms (contact, subscribe) that interact with back-end services to send emails or save data in MongoDB.

The private dashboard interacts with a back-end server that exposes an API and manages data stored in a MongoDB. In addition, the back-end server runs multiple cron jobs for data reconciliation, email notifications etc.

Both the web app and the back-end server are configured to automatically deploy new releases.

Oh, I almost forgot! There is a Twitter bot that automatically posts random tweets regularly based on data from MongoDB.

As you can see, it has a little bit of everything and most pieces are coupled together, like the web app and the API, or the Twitter bot and the MongoDB while others are independent.

I didn't want to manage a database server myself so I opted for Mongo Atlas. I have some free credits and they even offer a free tier with up to 512MB of storage, which is enough for testing or even small apps. Spinning up a cluster is super easy and, once done, I just needed to configure different users with different permissions for what I need. So that was the easiest part I'd say

I'm not going to get into the details of how I built this, but just for reference, my web app was built with Vue.js and the API with Strapi, a Node.js headless CMS.

To run both, decided I wanted to build the web app and the API as docker images and run them with docker-compose. The web app base image is nginx:stable-alpine as it will serve a static Vue.js app and the API base image is node:12-alpine. Whenever I have a new release ready, I run a simple bash script that builds the image and pushes it to DockerHub:

My docker-compose file to run both containers together looks like this:

As you can see, each container runs on a different port (API on 1337 and web on 80). This is important as we'll have to deal with the ports on the next step.

I'd say networking has been the most complex topic on all of this, probably because it's not my strongest suit. It involves multiple AWS services and the domain registrar, in my case NameCheap. I'll have different domains and subdomains:

To manage all this in AWS, I'd need to create load balancers, target groups, an SSL certificate and an EC2 instance where my docker containers will actually run. Here is a diagram of all the components. 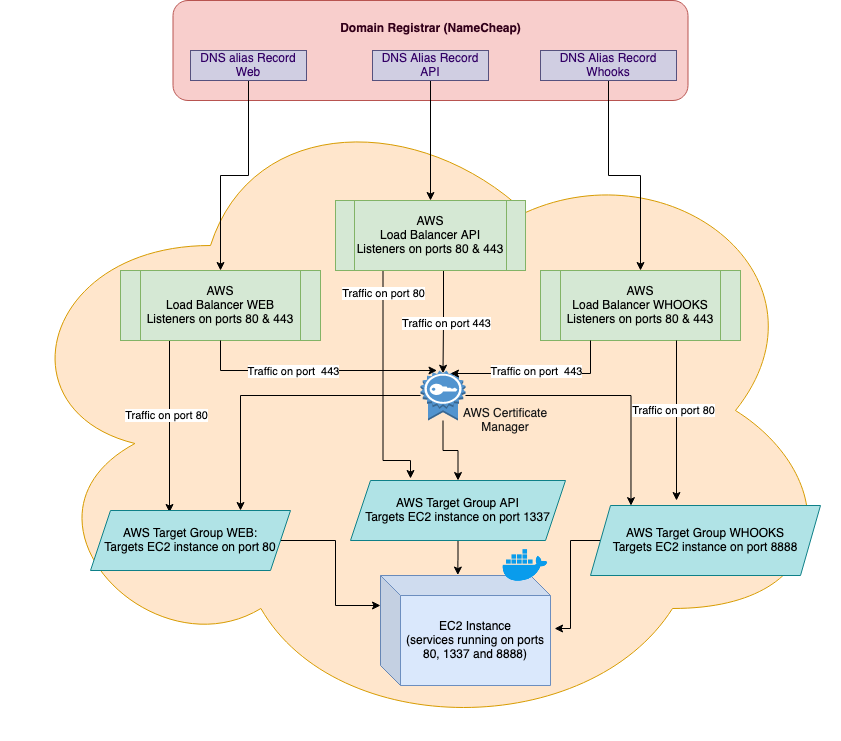 Let me dive deep into each piece and explain how they work together from top to bottom:

These are all the pieces I needed to run the private part of the website, however, as I mentioned earlier, the forms in the public pages run on a different back-end.

I decided to separate public and private traffic on different back-ends as I didn't want one to impact the other. The API for the private part was going to run on an EC2 instance but I decided to use AWS Cloud functions for the public.

I created different Lambda functions for each functionality needed, like saving subscribers in MongoDB or sending an email when a user leaves a message in the contact form or validating recaptcha forms. The trigger for all these functions is an HTTP request and to manage these requests, I had to create an API in the AWS Gateway API. You can find more details about how to create these in this article in my blog.

Finally, the Twitter bot is just another Lambda function that runs on a schedule instead of being triggered via HTTP. It queries a collection in MongoDB and extracts a random document to build the tweet. Then it uses the Twitter API to post the tweet. It's pretty simple, but it just works .

I hope you find this useful. To be honest, I've written this article because I wanted to have all my notes about everything I've learnt while building this project in the same place . I've probably missed a few details so, if you are building a similar project and need some help, feel free to reach me on Twitter @uf4no.

Oh, I almos forgot, the project I'm talking about is theLIFEBOARD, a weekly planner that helps people achieve their life goals and create new habits. Check it out and let me know what you think!

Serverless functions have some advantages over a full backend service that we might want to consider when creating small projects. In this article I explore them and create a subscription form using an AWS Lambda function and Gateway API.